Dilvo Lotti was born in San Miniato on 27 June 1914. He was a painter, a sculptor and a graphic designer.He was an exponent of the European Expressionism.He started painting in 1931 using a box of oil colours his teacher , Francesco Chiappelli, had given him ; this box is still kept in his house in Miniato. 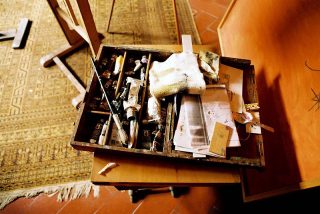 He studied at “Istituto d’ Arte” in Florence, where he got a diploma in 1935. In the 1930s he lived in Florence where he met famous writers and artists in the literary café, “Caffe’ delle Giubbe Rosse”, a famous meeting place for Italian artists and writers. After living in Milan for a short period, he won the “Panerai Prize” in 1940 with his masterpiece “Still Life and Child”(“Natura Morta e Bambino”). He participated in famous Italian art exhibitions such as “La Triennale di Milano”(1941),” La Quadriennale di Roma”(1941) and “La Biennale di Venezia” (1942). 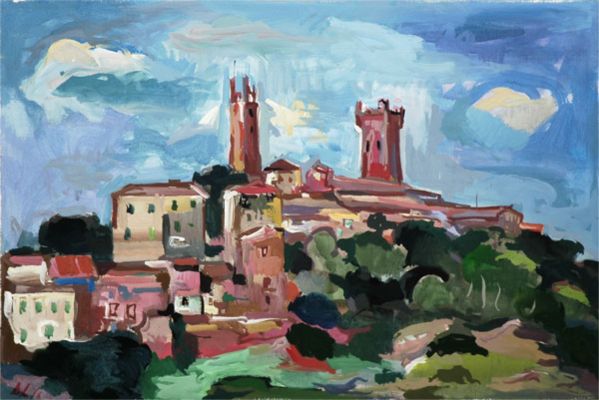 He married Giuseppina Gazzarrini in 1943 and he lived with her in their house-museum in San Miniato until his death. 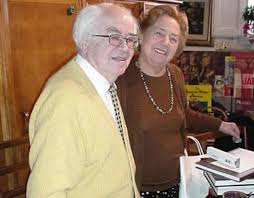 In 1947 Dilvo Lotti created the “Istituto del Dramma Popolare” (“Folk Drama Institute”) with some of his friends. Since then an open-air performance of a religious drama has been put on in San Miniato in July every year. It attracts international dramatists, directors and actors. Dilvo Lotti created twenty-two engravings for the posters of this performance. In the same period he directed three plays: “Marianna Pineda”, “Uno cantava per tutti” and ”Essi arrivarono ad una città”. 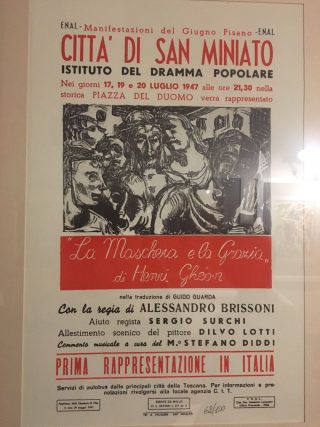 From 1953 to 1985 he frescoed important churches and buildings such as the Cathedral in Pontedera , the Refectory of the “Palace of the Seminary” in San Miniato, the “Sala del Consiglio” of “Cassa di Risparmio” in San Miniato, “The Church of Santa Marcella” in Rome, and ”La Mogliazza” in Pavia.
His works of art were exhibited in art galleries in Florence, Venice, Genoa, Rome, Pisa, Milan, London (1962), Biarritz (1971), Hildesheim (1995) and Villeneuve les Avignon (1999).

Dilvo Lotti loved San Miniato. He was an art teacher at Scuola Media “Franco Sacchetti” in San Miniato for many years. In 1968 he organized the first “Kite Festival”, which is still very popular with children and teenagers. 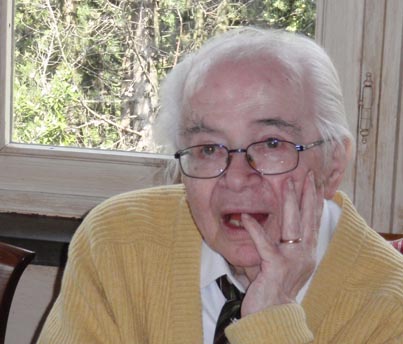 The title of this painting is “Procession in San Miniato”. In the foreground we can see lots of people following a procession: they are coming from the countryside and they are heading off to San Miniato. The procession occupies the whole painting starting on the right and ending at the top on the left.
The valleys and hills are dotted with houses, cypresses and other trees .In the background we can see the city of San Miniato with its Cathedral, Matilda’s Tower, The Tower of Frederick II and St. Francis‘s Convent and Church. There are houses, buildings and towers in the centre and on the left of the painting. The painting is characterized by several horizontal lines and some concave and convex lines representing the typical structure of the landscape of San Miniato. The fields have particular shapes and colours and are characterized by different kinds of cultivation. The cypresses form vertical lines which correspond to architectural buildings on the horizon. The sky is blue and pink and is characterized by horizontal lines.

This painting was painted for the famous “San Miniato nel Tempo” exhibition, which was organized by Dilvo Lotti in 1985. The title of this painting is “San Miniato nel Tempo” .In the foreground; there are some people and some objects on a table. On the left we can see the painter’s self- portrait, his wife, Giuseppina, who looks very young and is touching a white dove, and a woman with a bunch of red roses in her hands. In the centre of the painting there are some objects ,which are symbol of his artistic and cultural life such as brushes, paintings, books ,grapes, apples, pomegranates, a slice of watermelon and a clay money -box. On the right there is a woman, who has a wreath of grapes on her head and a glass of red wine in her hands, and a man who has a deck of cards in his hands. In the background we can see the city of San Miniato with its Matilda Tower and the Tower of Frederick II, some buildings and some fields.

In this painting San Miniato is portrayed as an ideal world where the artist can live in contact with the people and the things he loves: his wife, his paintings and his birthplace. 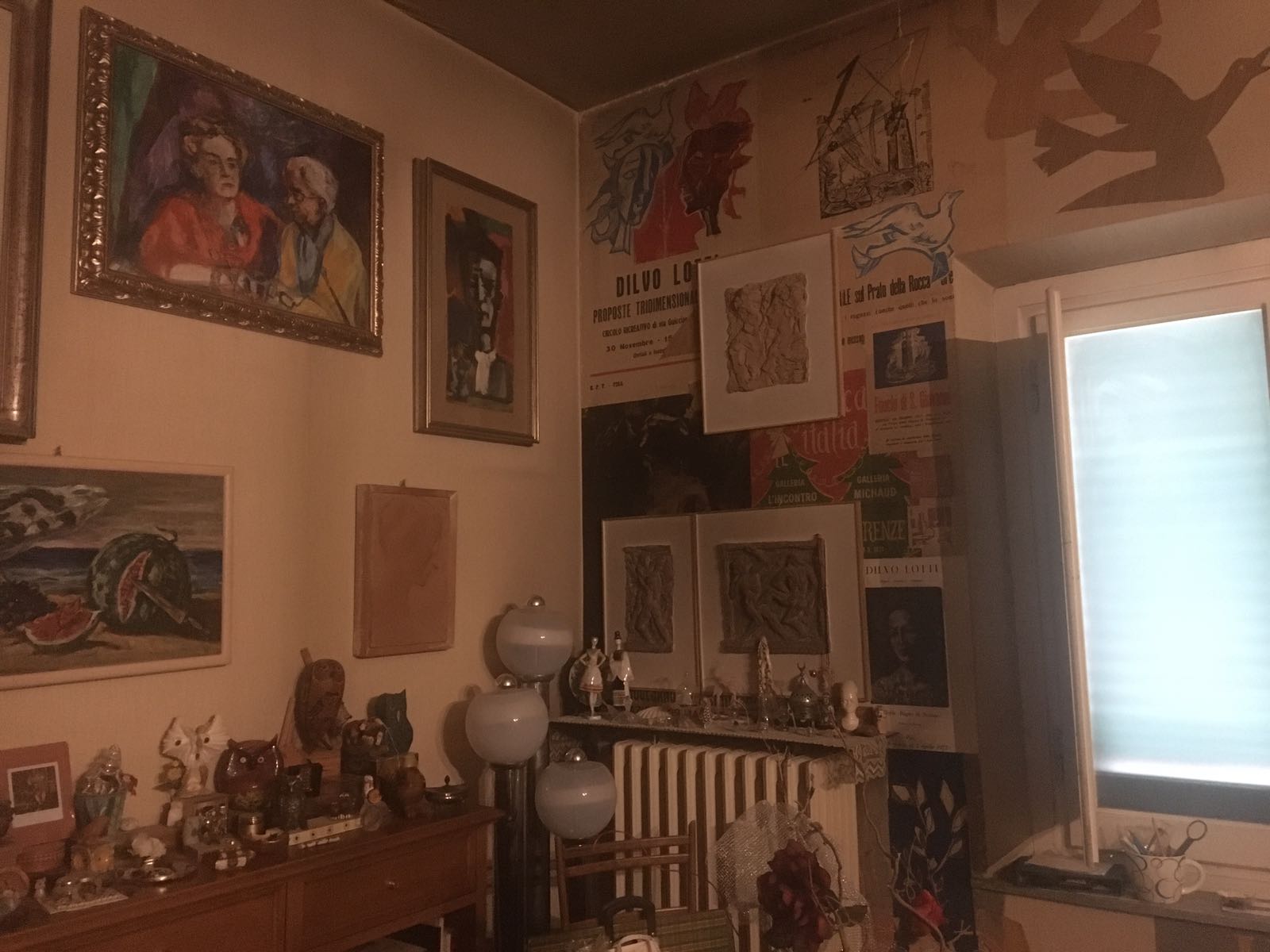 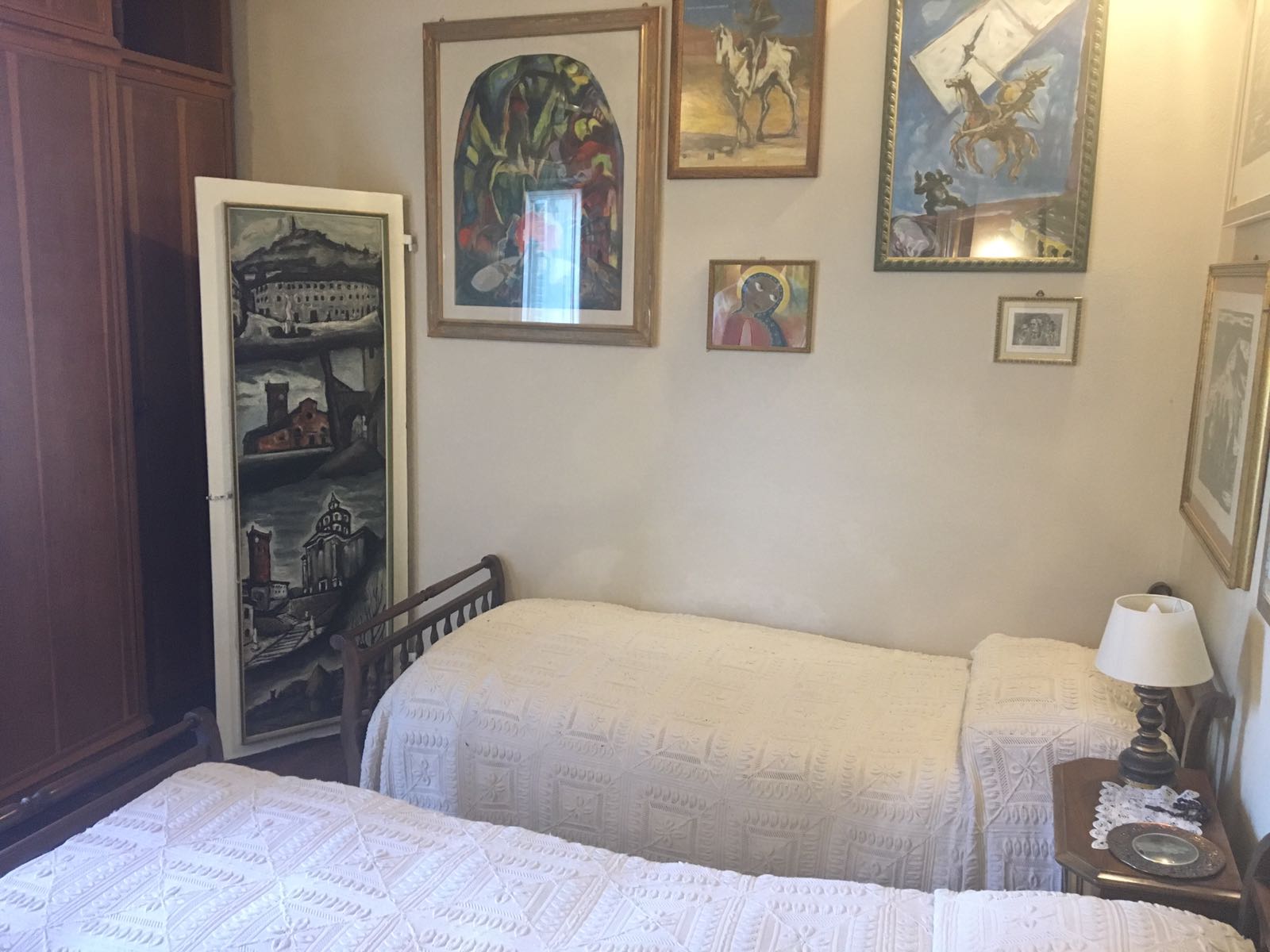 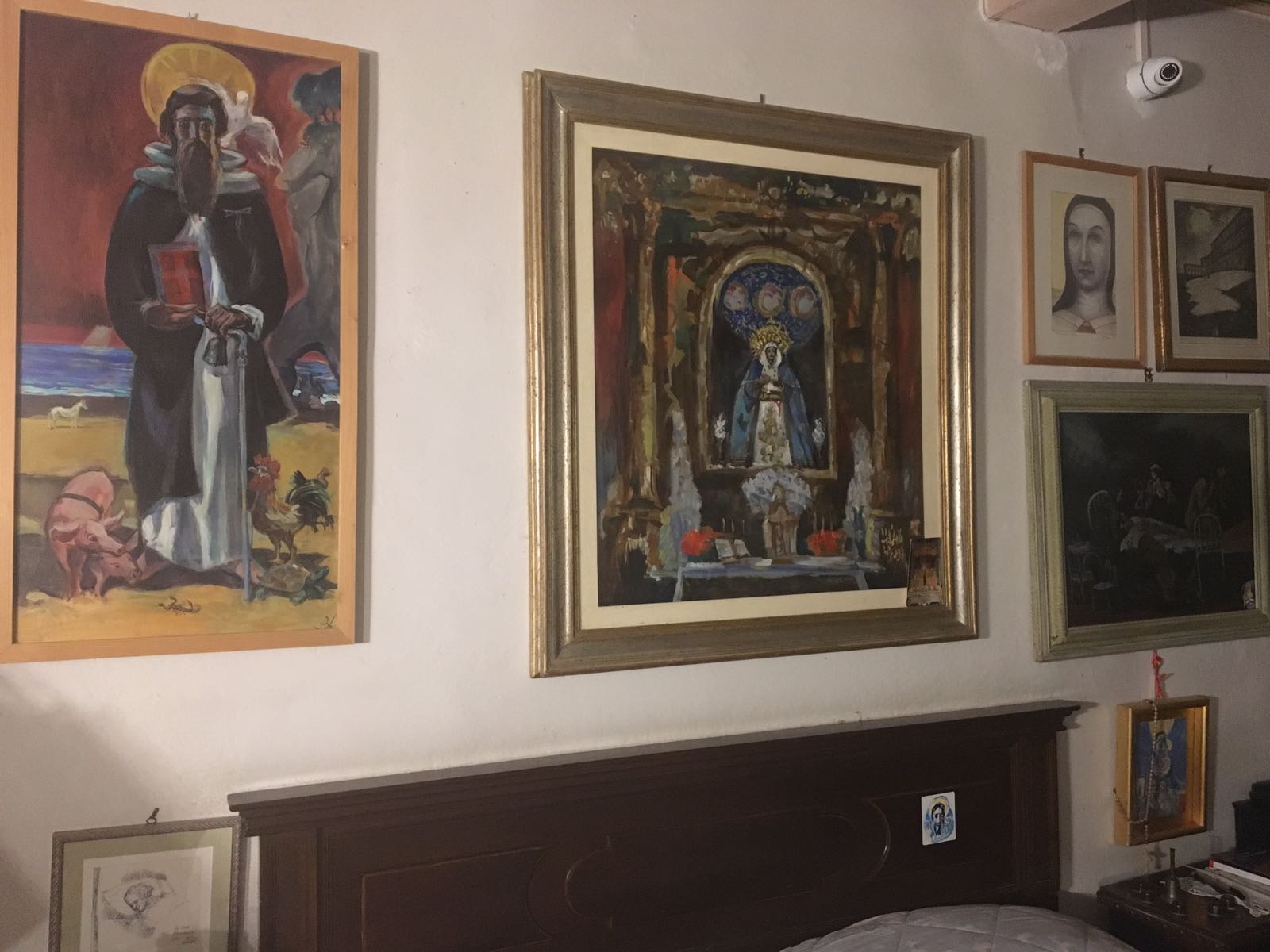 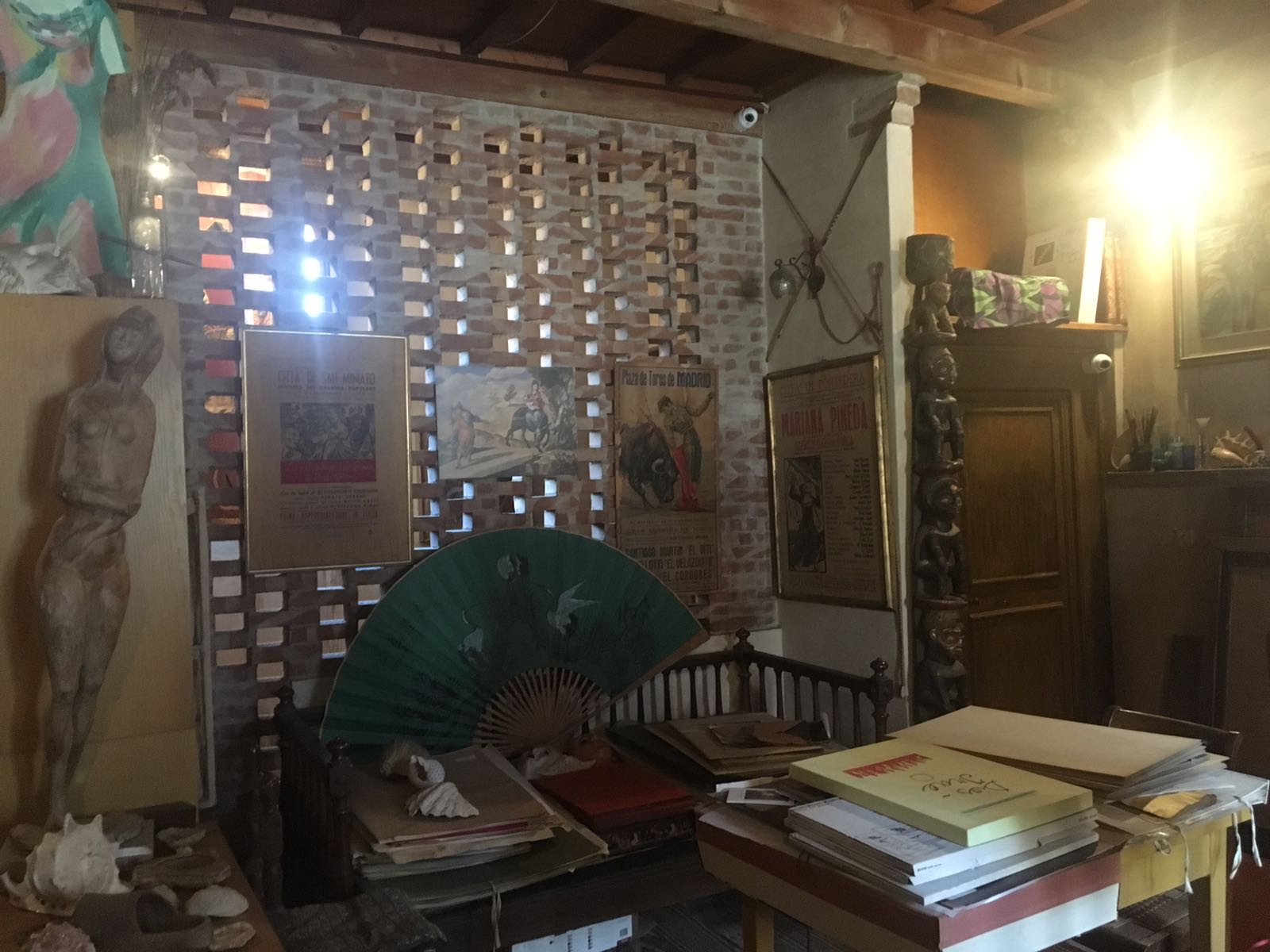 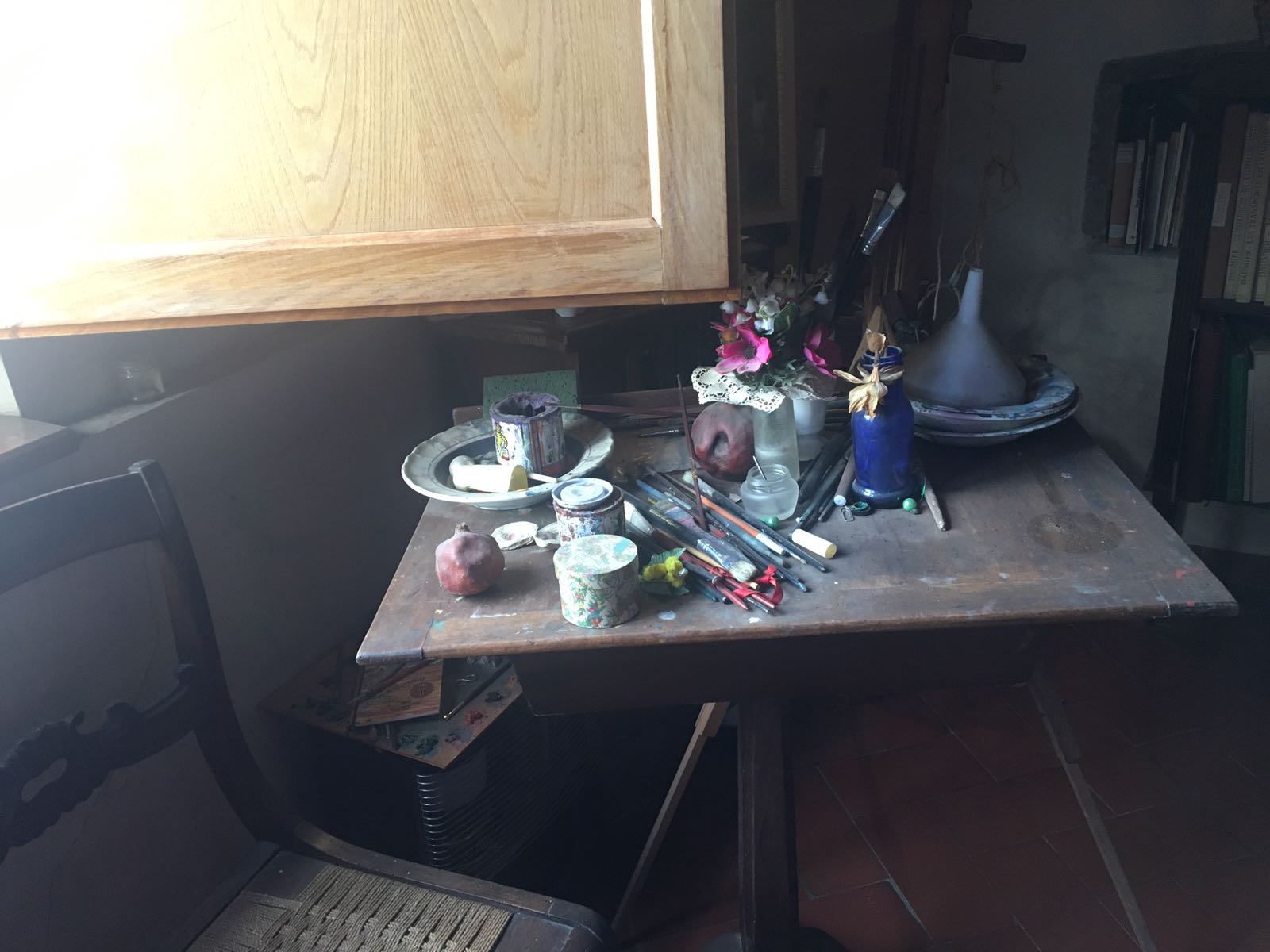 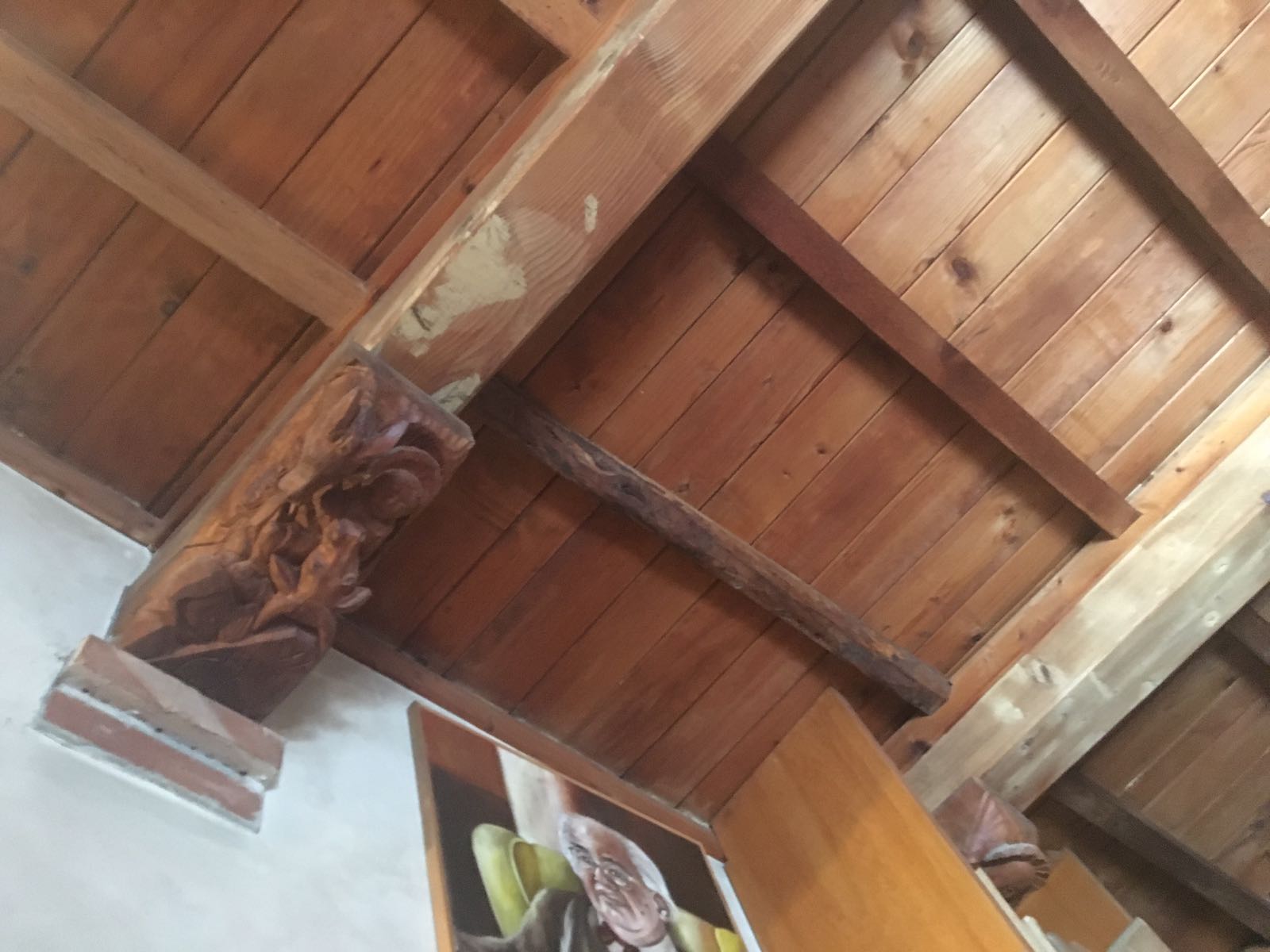 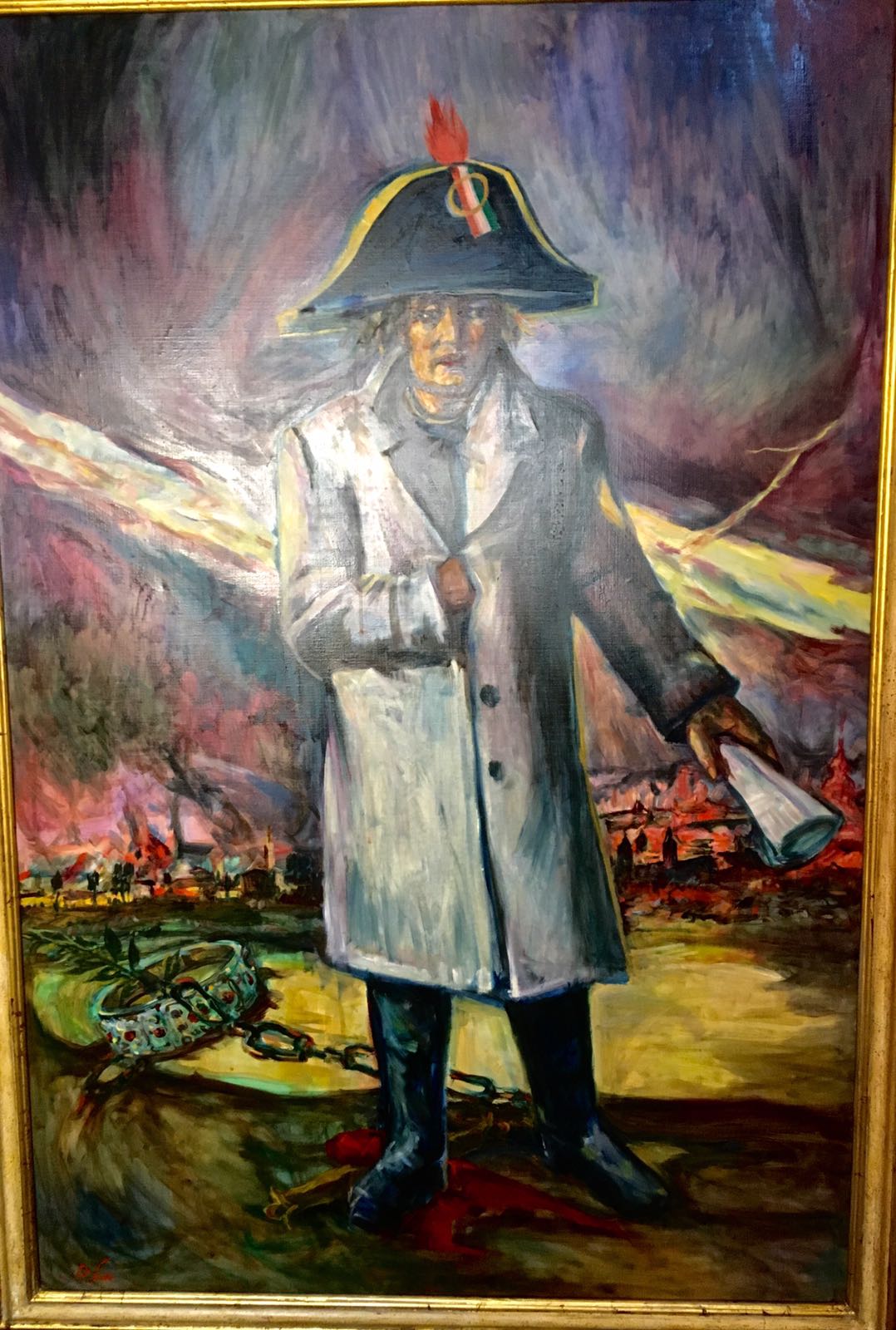 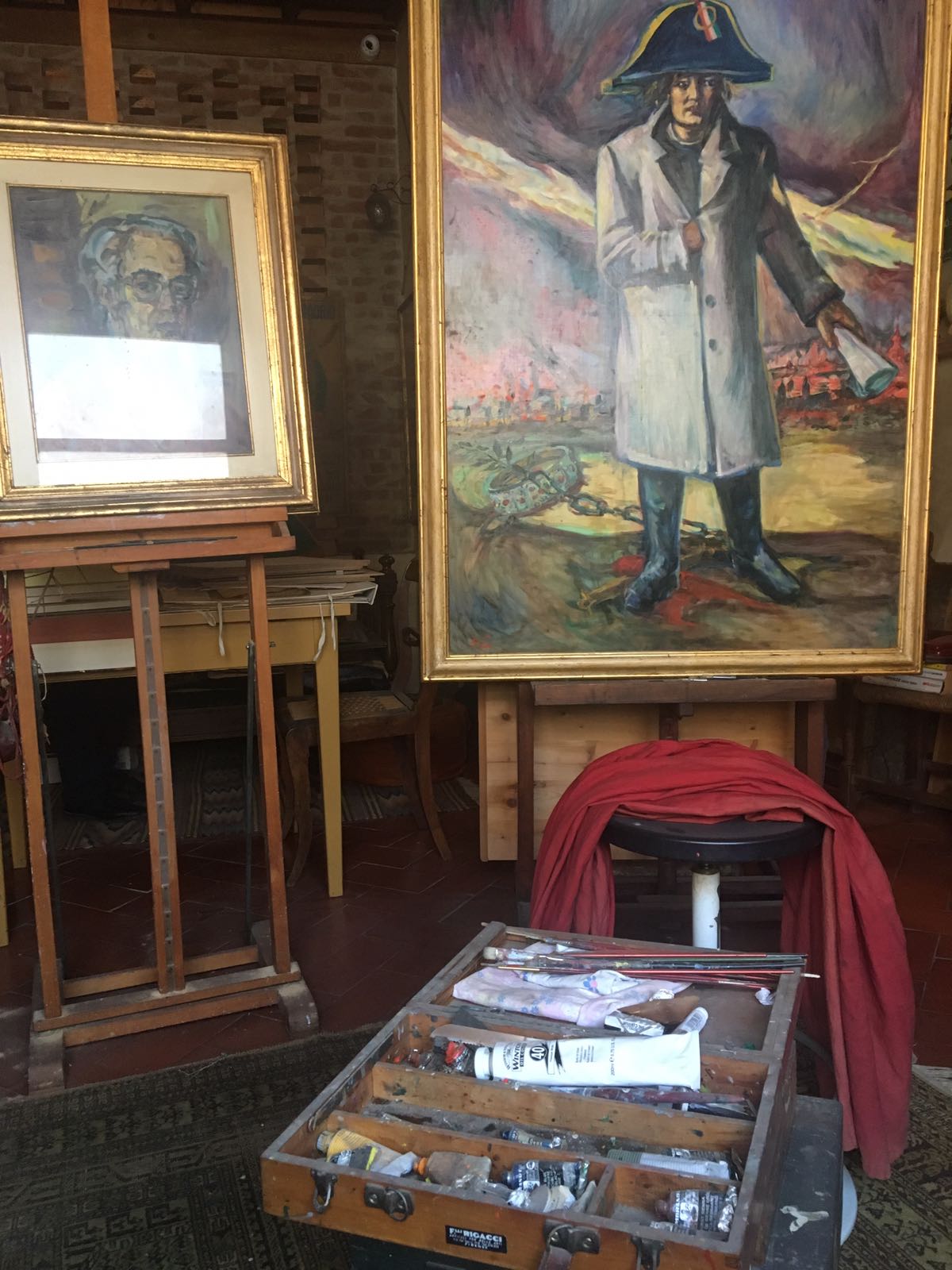 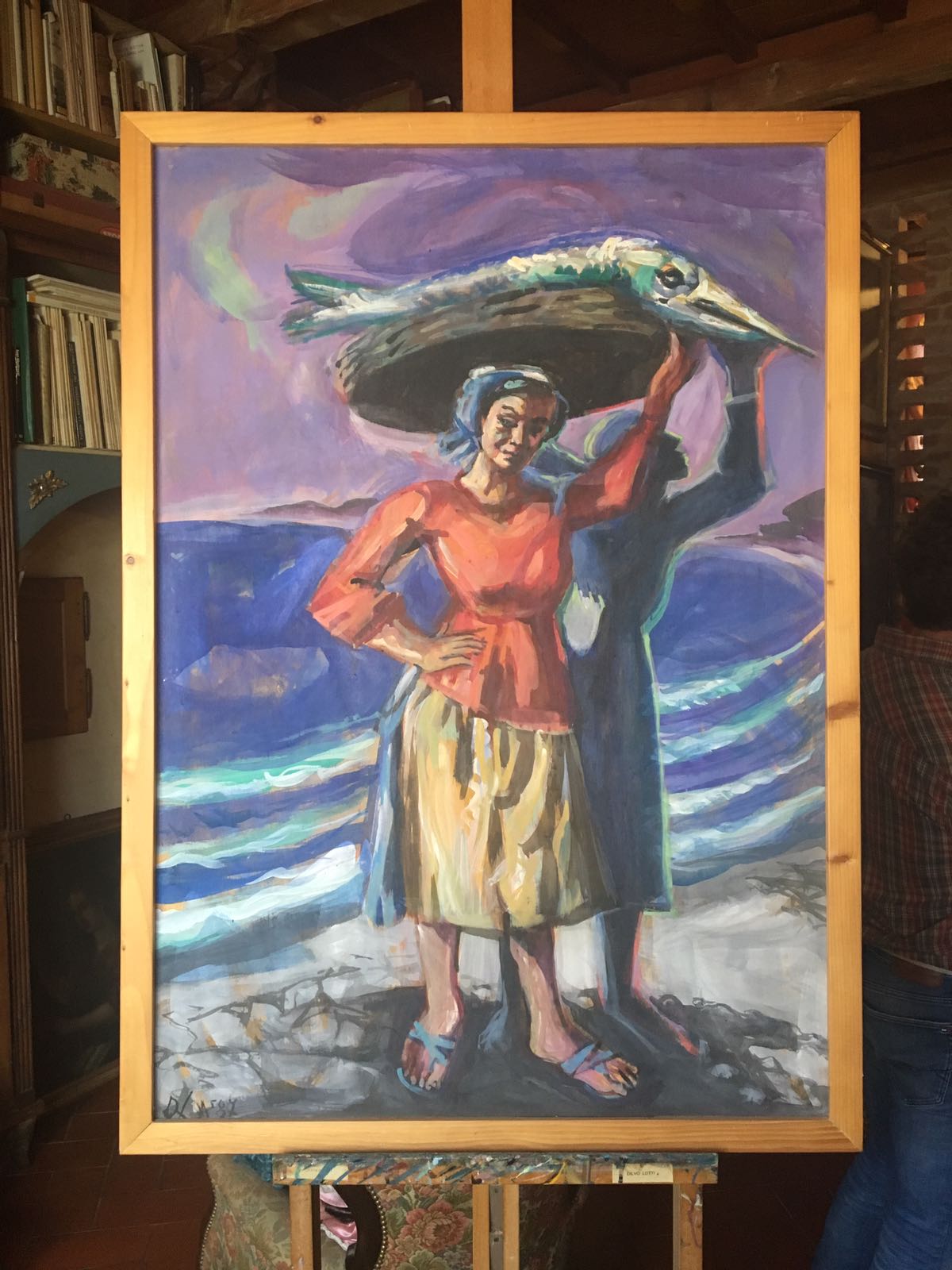 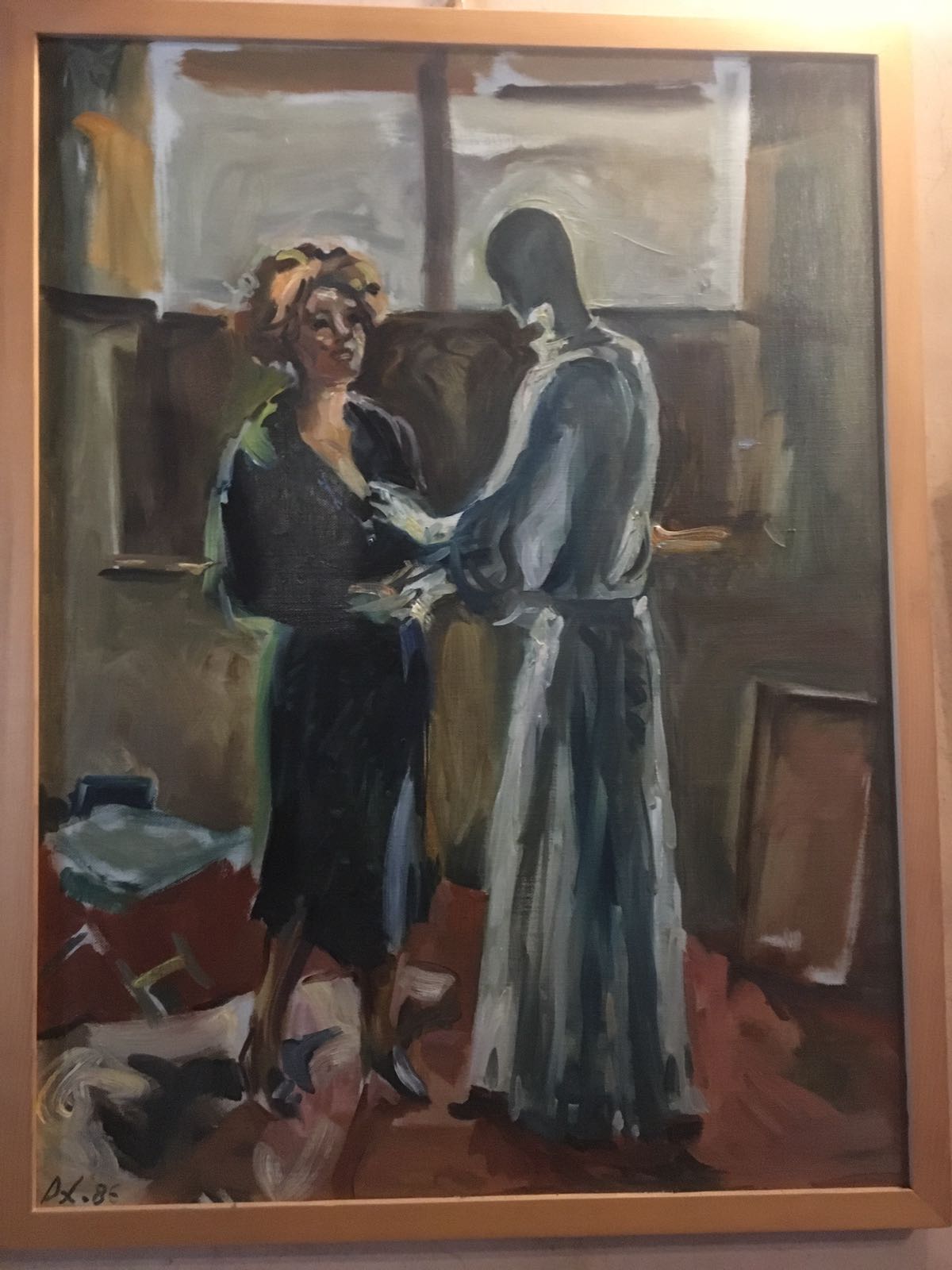 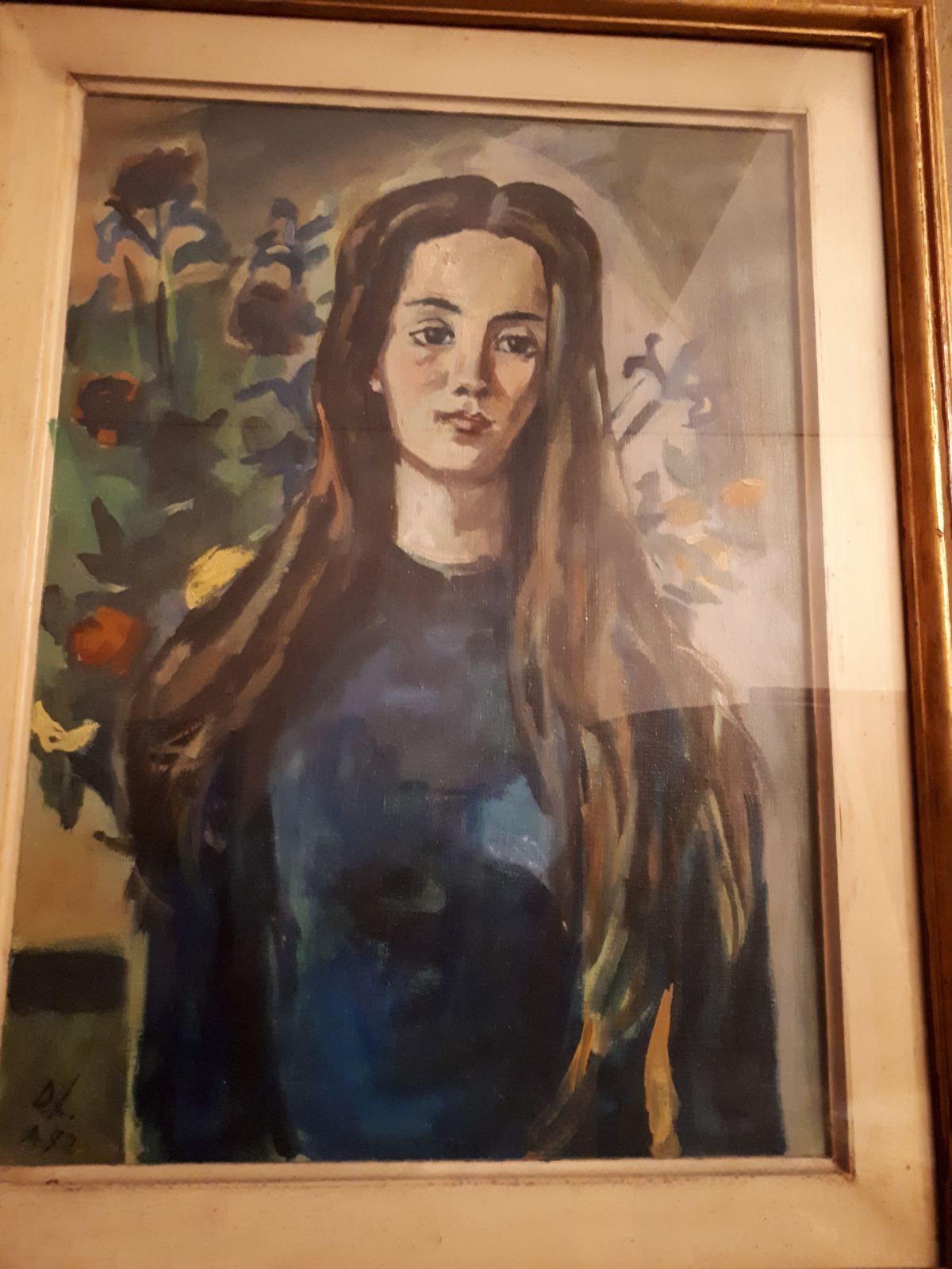 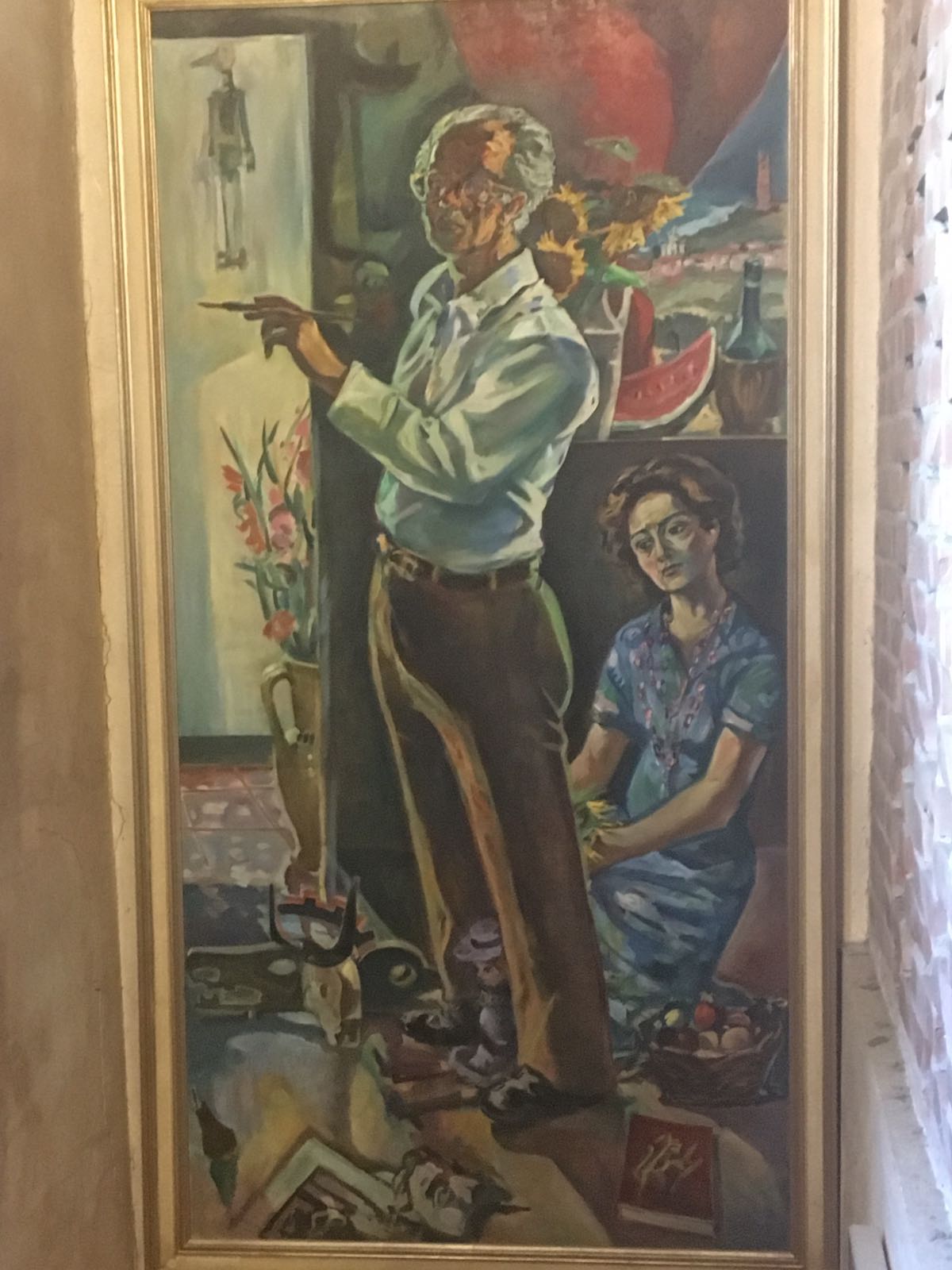 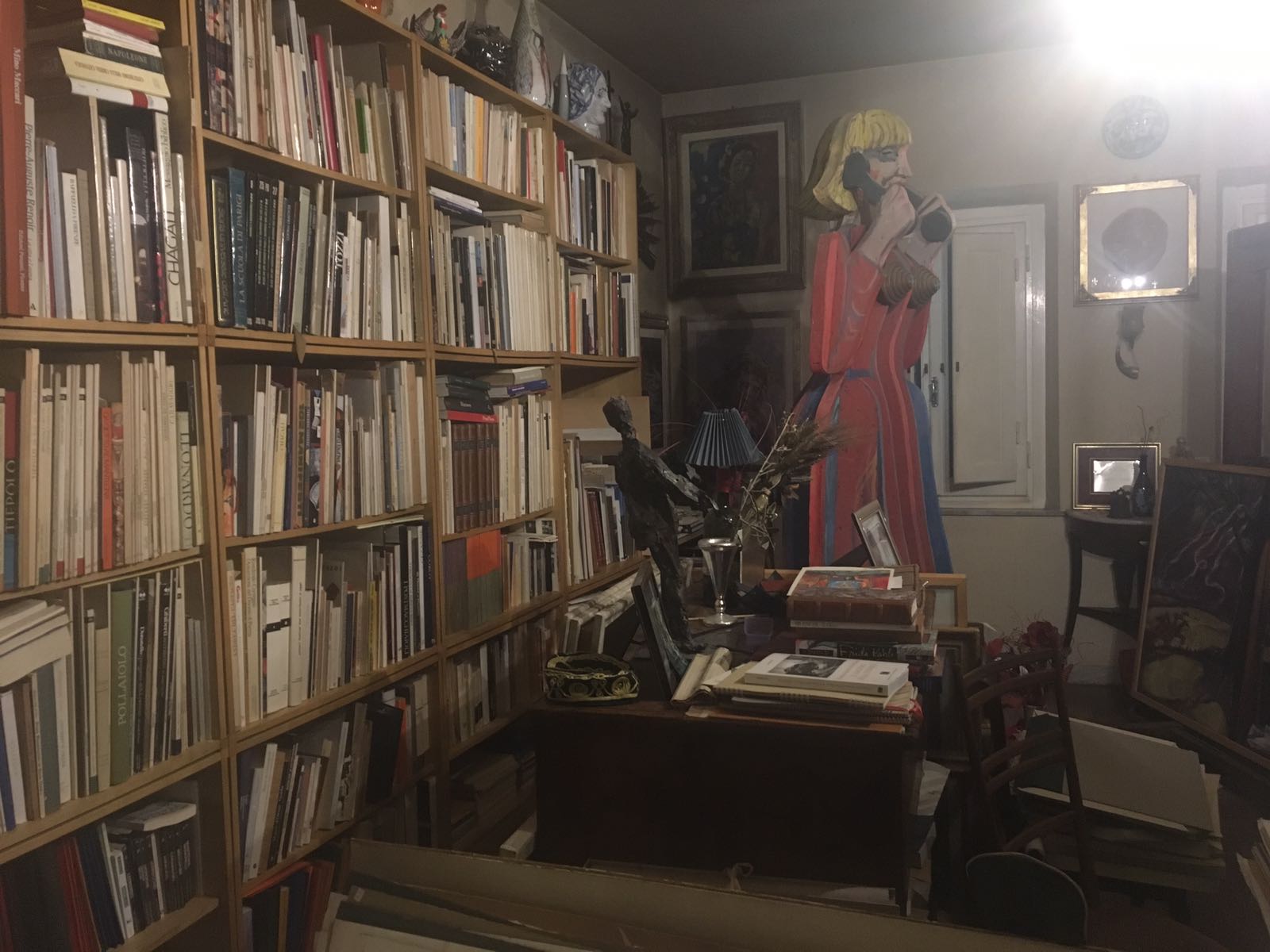 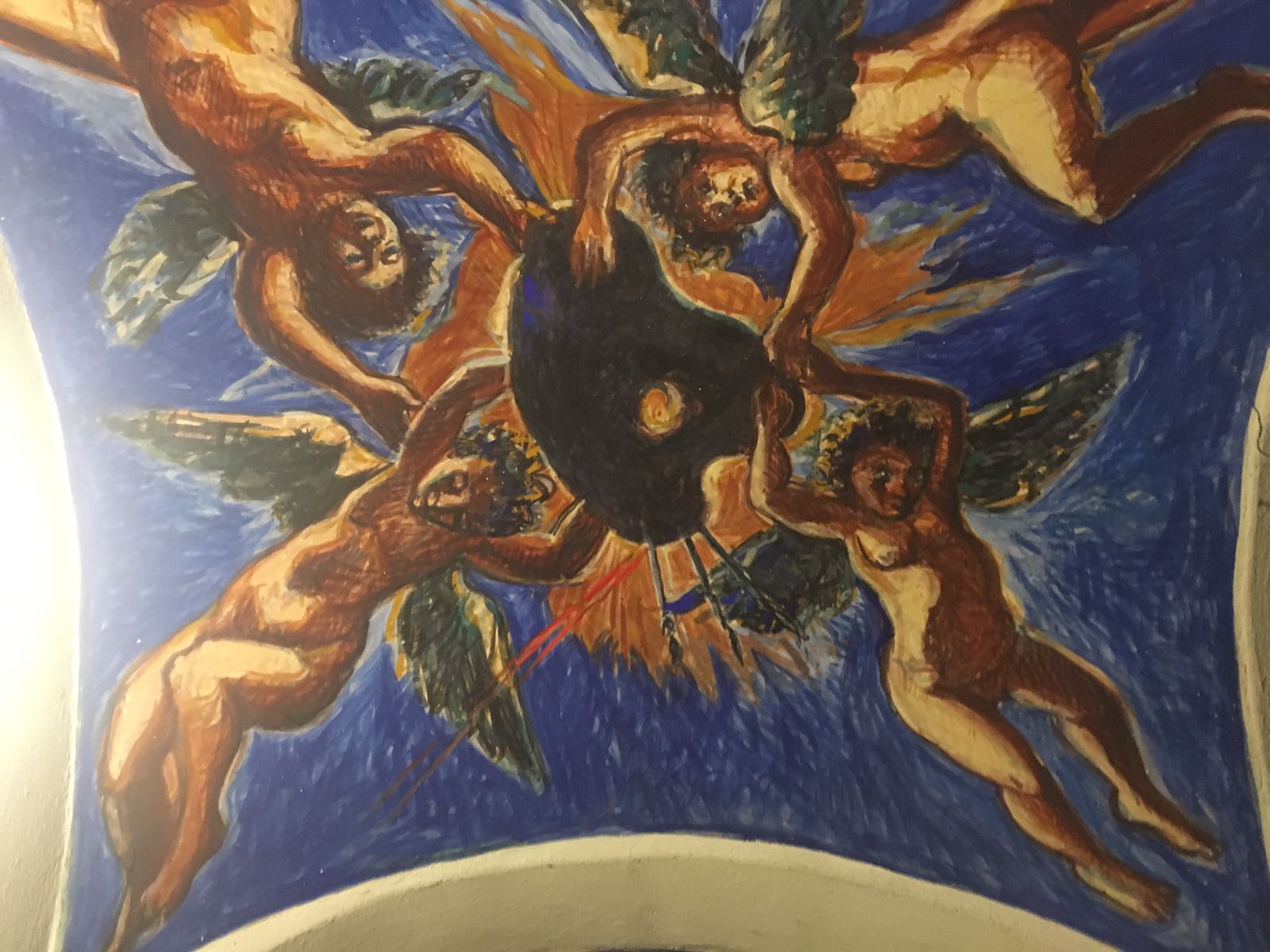 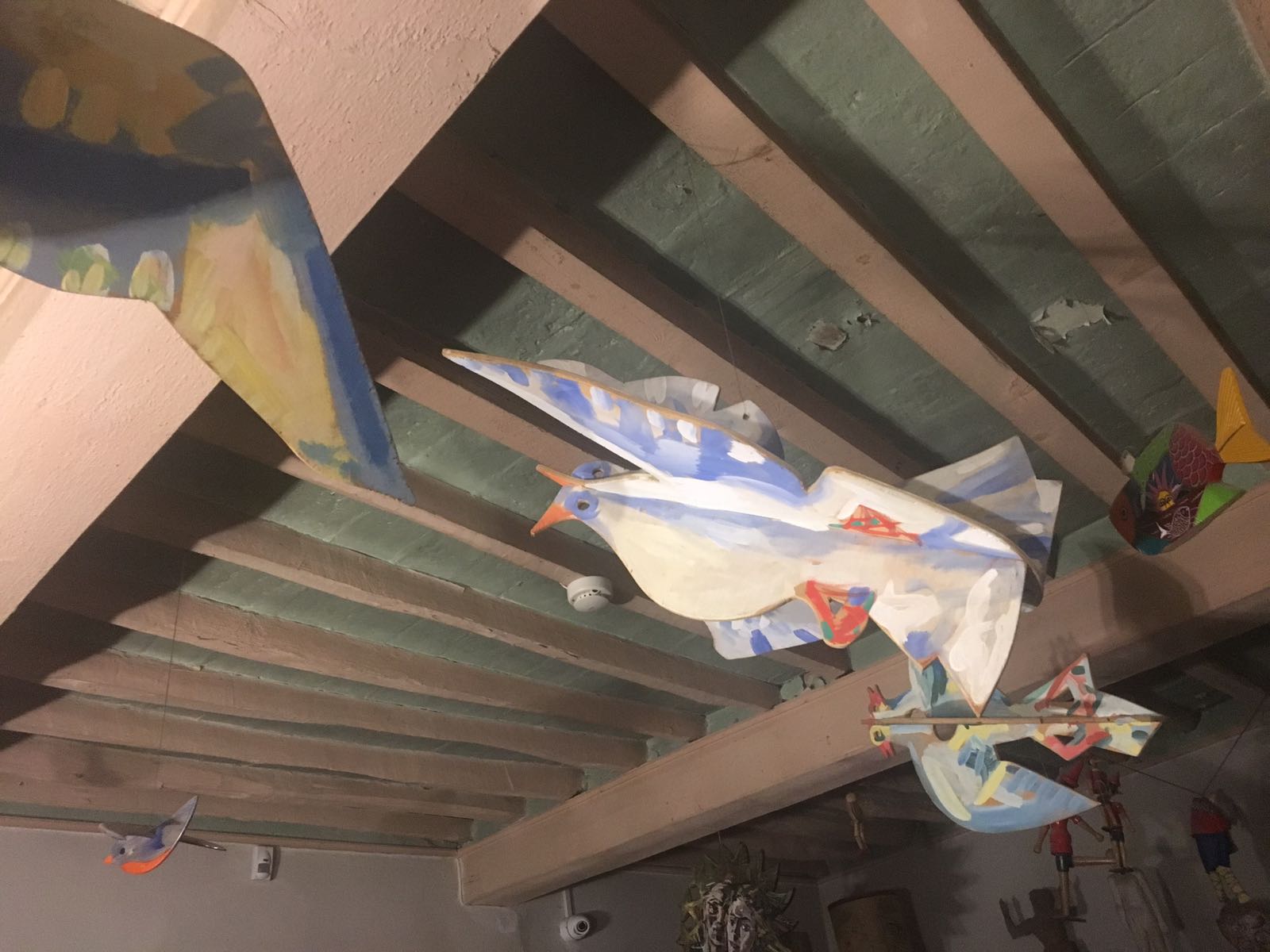 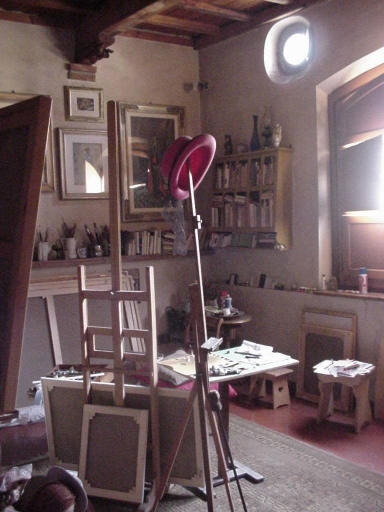 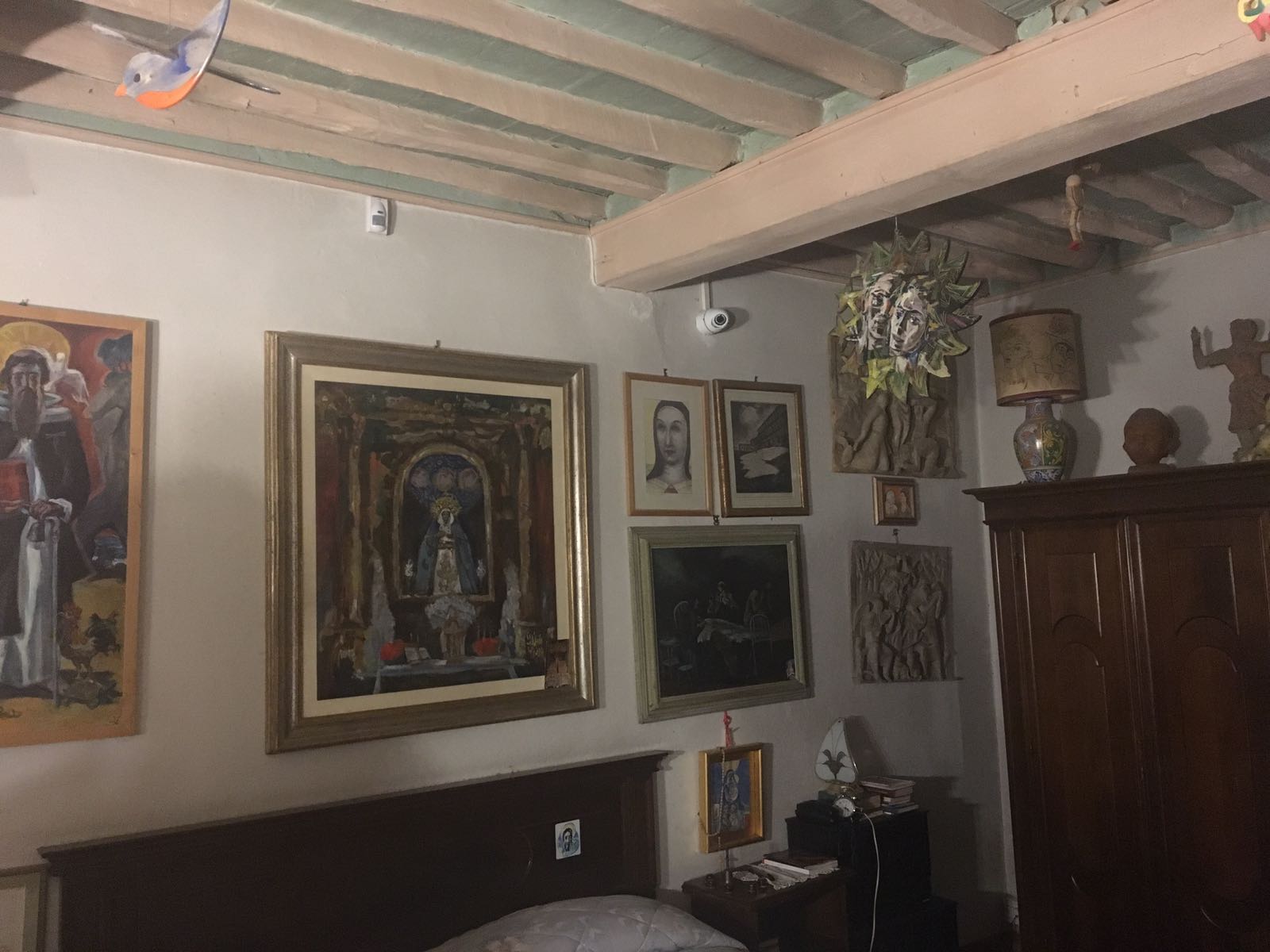 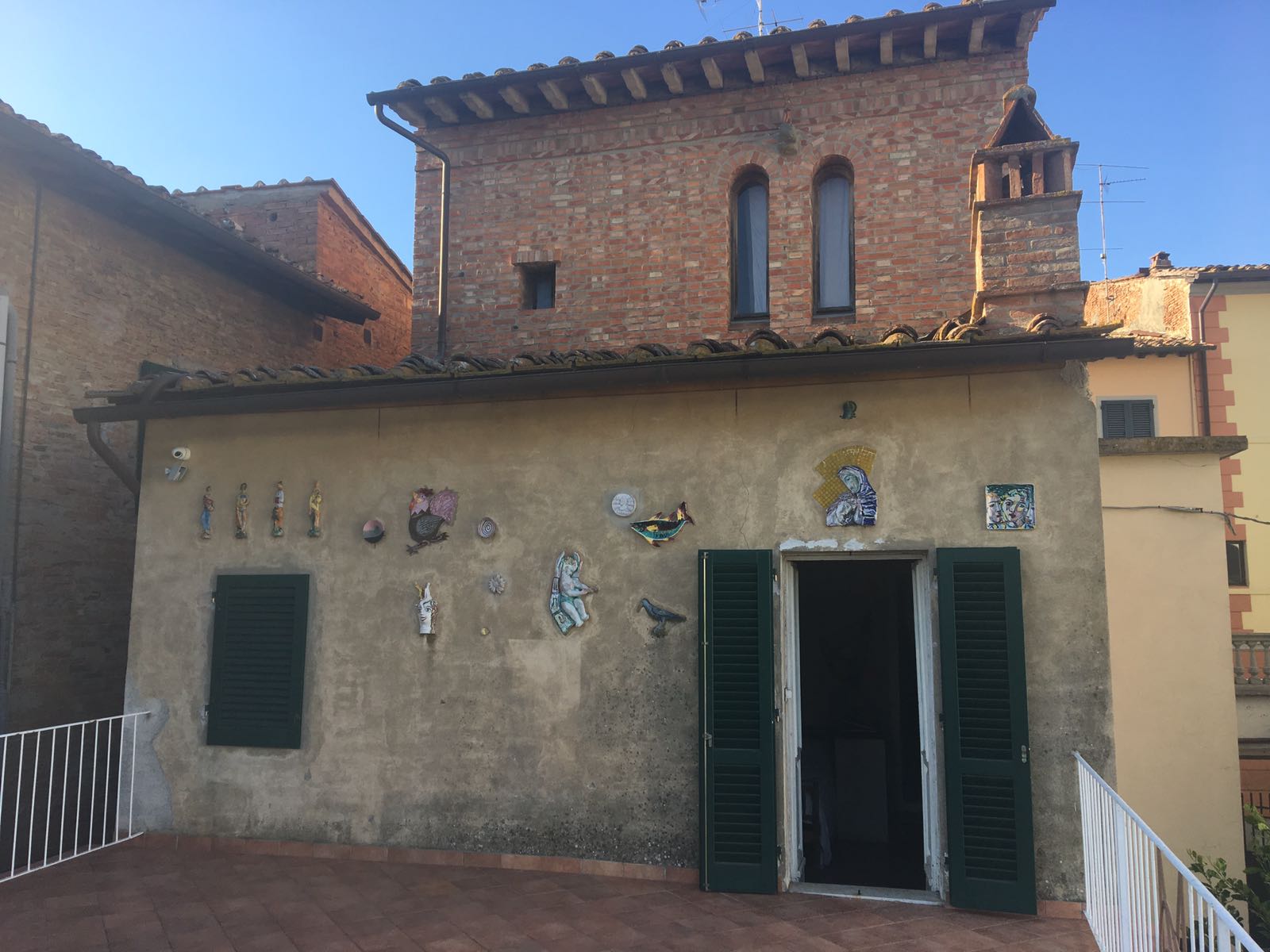 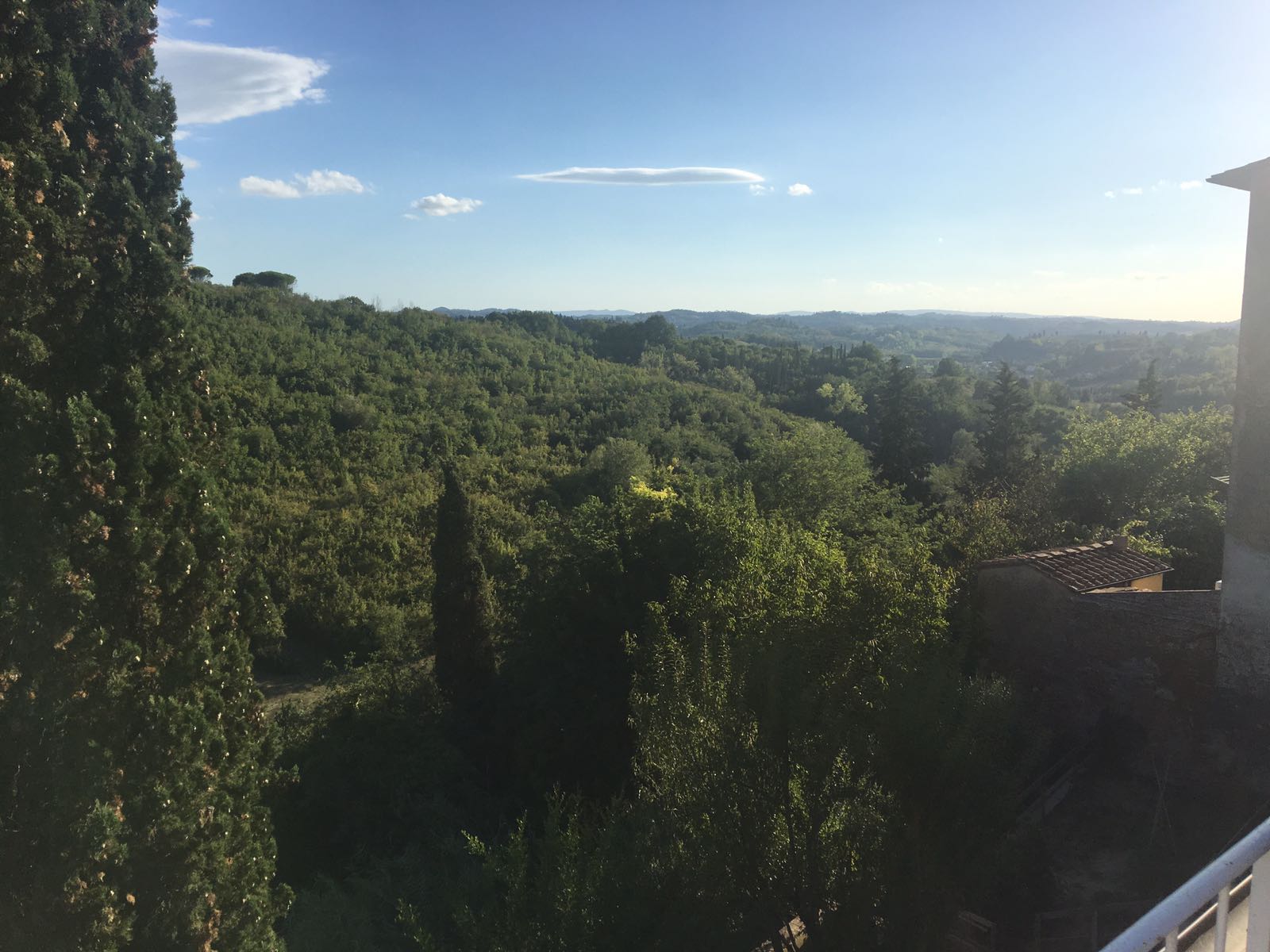 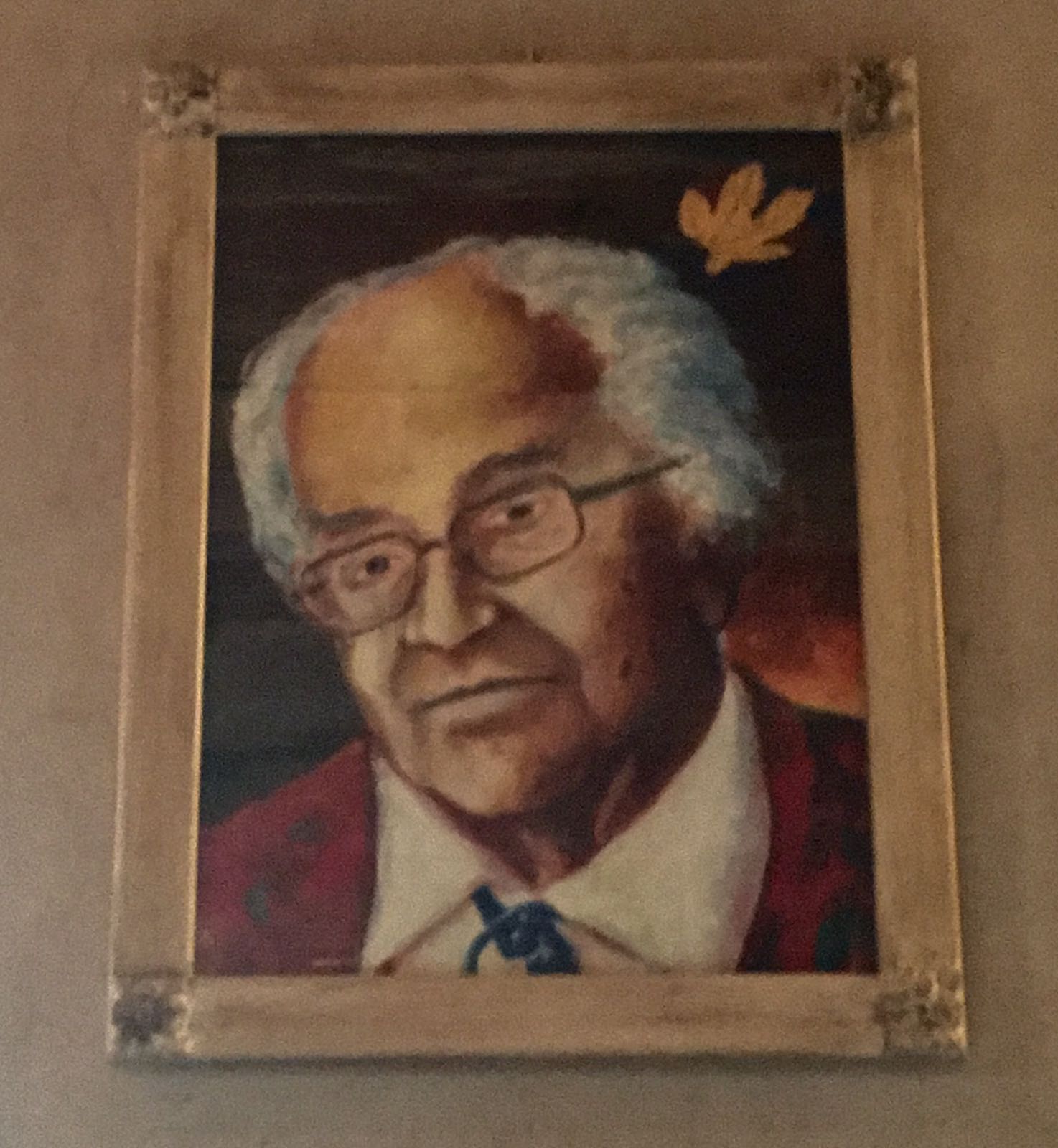 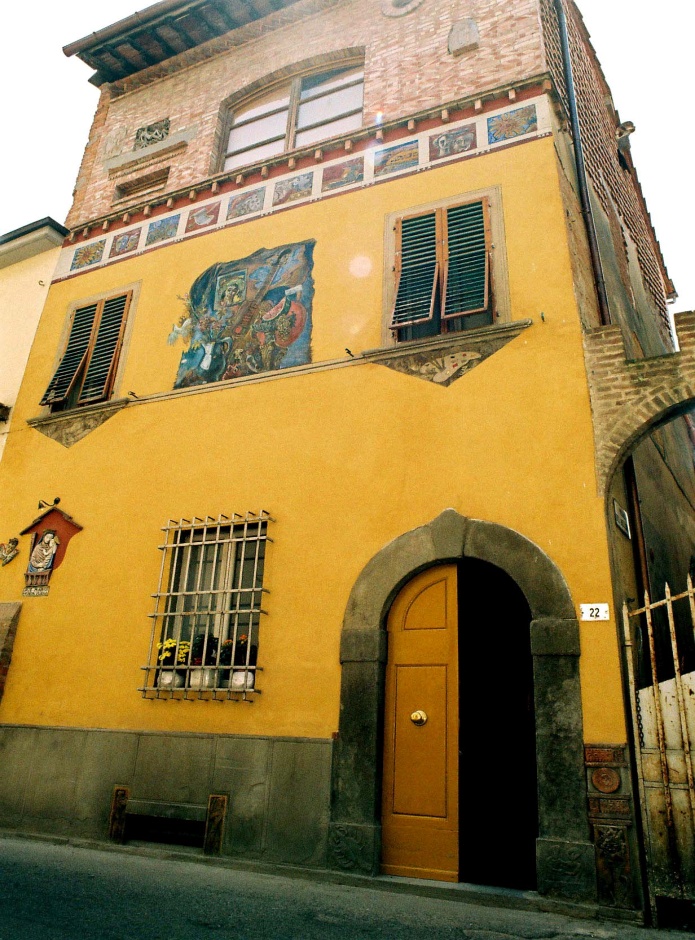 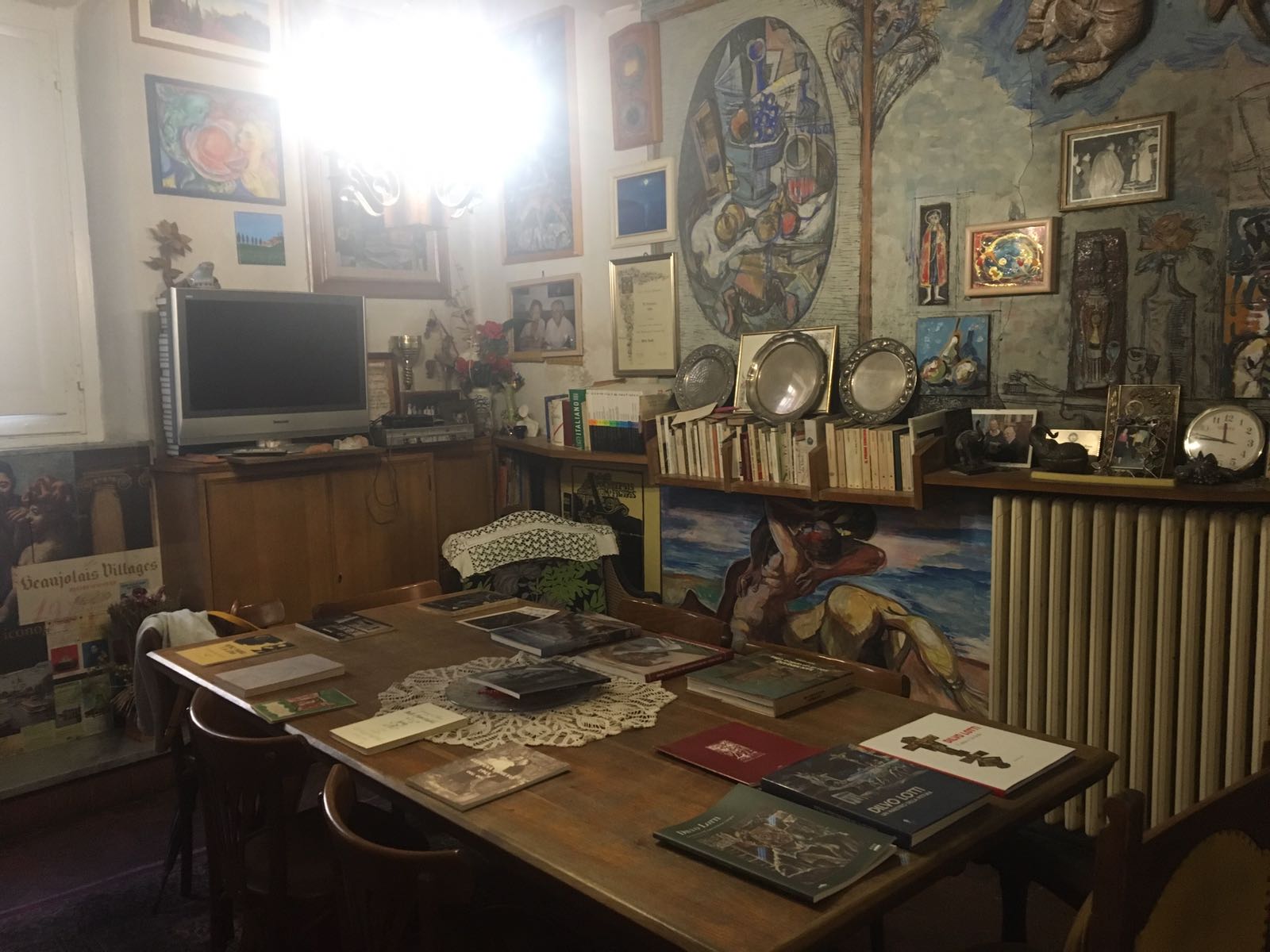 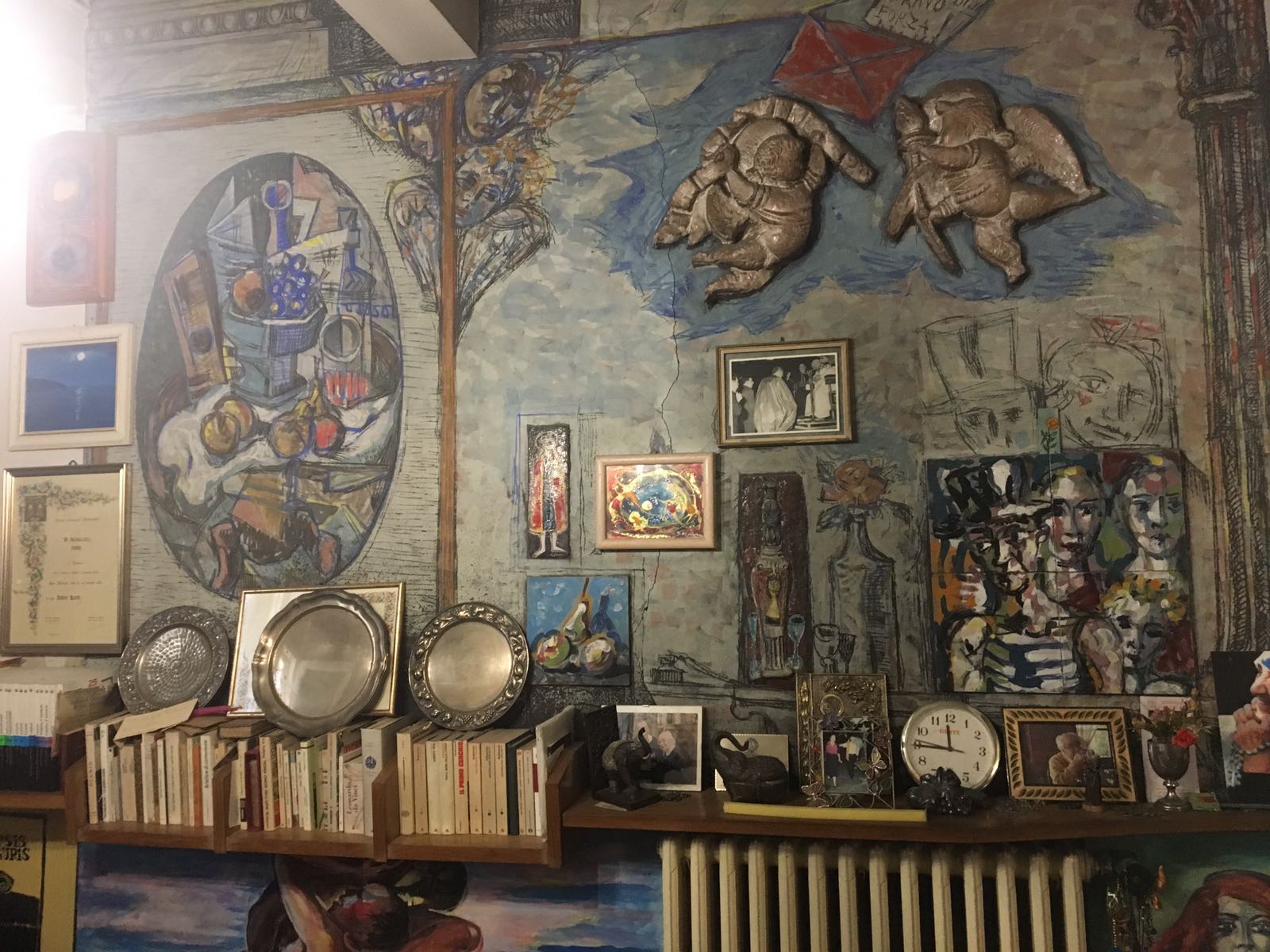